Me163B “Komet” was the world’s only operational rocket-powered interceptor. Me163B had tremendous speed and climb rate thanks to its unique power source, so it’s hard to be intercepted by allied fighters during powered flight. But its high speed also resulted in difficulty to shoot accurately during a very short shooting time period, and hence Me163Bs gained very limited victories.

This 1/32 scale Messerschmitt Me163B Komet Rocket-Powered Interceptor plastic model kit faithfully represents its small tail-less shape. Subassemblies like engine, T-Stoff tank and ammunition box are included. Many hatches can be built either in open or closed position. Model fuselage breakdown refers to the structure of real aircraft. No cement is needed to join the front and rear parts of fuselage, and a support frame is provided to show interior details. Three painting schemes are provided. Total length: 178mm width: 292mm 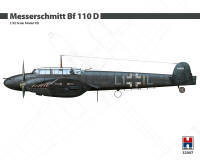