This is the second set in a series of Hataka Hobby products designed for achieving realistic effects of wear and tear on AFV models via different painting and weathering techniques.

Careful selection of paints included in HTK-AS26 set allows for achieving the following realistic corrosion and rust effects on metal-imitating elements of every scale model: natural rust effect (surface or point), rusty stains or streaks, multilayer chipping of paint of different size and depth, etc. Depending on the desired effect, various tones of rust are available - from old (dark brown and red brown) rust, through base tone, to fresh rust and two light rust colours for streaks and stains. 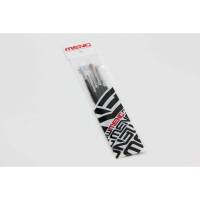