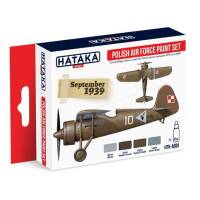 PZL P.7a fighter is a remarkable aircraft in the history of Polish aviation as a first all-metal monoplane stressed-skin construction introduced to mass production by the Polish aeronautic industry in 1933. As a result 150 PZL P.7a aircraft equipped Polish combat units while the European powers still were  using fabric covered biplanes.
After the introduction of its successor, PZL P.11c, the P.7a aircraft was used in training. Numerous excellent fighter pilots who brilliantly performed during the World War II have been earlier trained on P.7a. Witold Urbanowicz, top-scoring Polish ace of Battle of Britain was a fighter combat instructor and trained his students on P.7a before the war.
During the September 1939 campaign, 3 regular fighter squadrons and two improvised units formed at air force school were equipped with PZL P.7a. In spite of the poor armament and insufficient speed the PZL P.7a have scored six aerial victories. The advantage of this aircraft was maneuverability and very high construction durability.
After Soviet aggression against Poland on September 17, 1939, the Polish Military Aviation was ordered to evacuate remaining forces to Romania. As a result 14 of P.7a machines were taken over by the Romanian Air Force. Approx. 20 planes were captured by the Russians and over a dozen by the Germans.