This is a 1/72 scale plastic model assembly kit depicting the Mk.Vb, the most prolifically produced variant of the Spitfire.

★From the elegant overall form to Mk.Vb-specific features such as the 20mm cannon-equipped wing, the form of the aircraft is captured in style.

★The model can be assembled with different wing designs.

★Parts are included to recreate the special air filters seen on TROP variants that were deployed in tropical climes.

★Comes with four marking options and a display base. 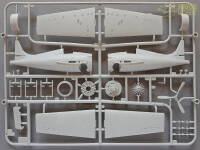